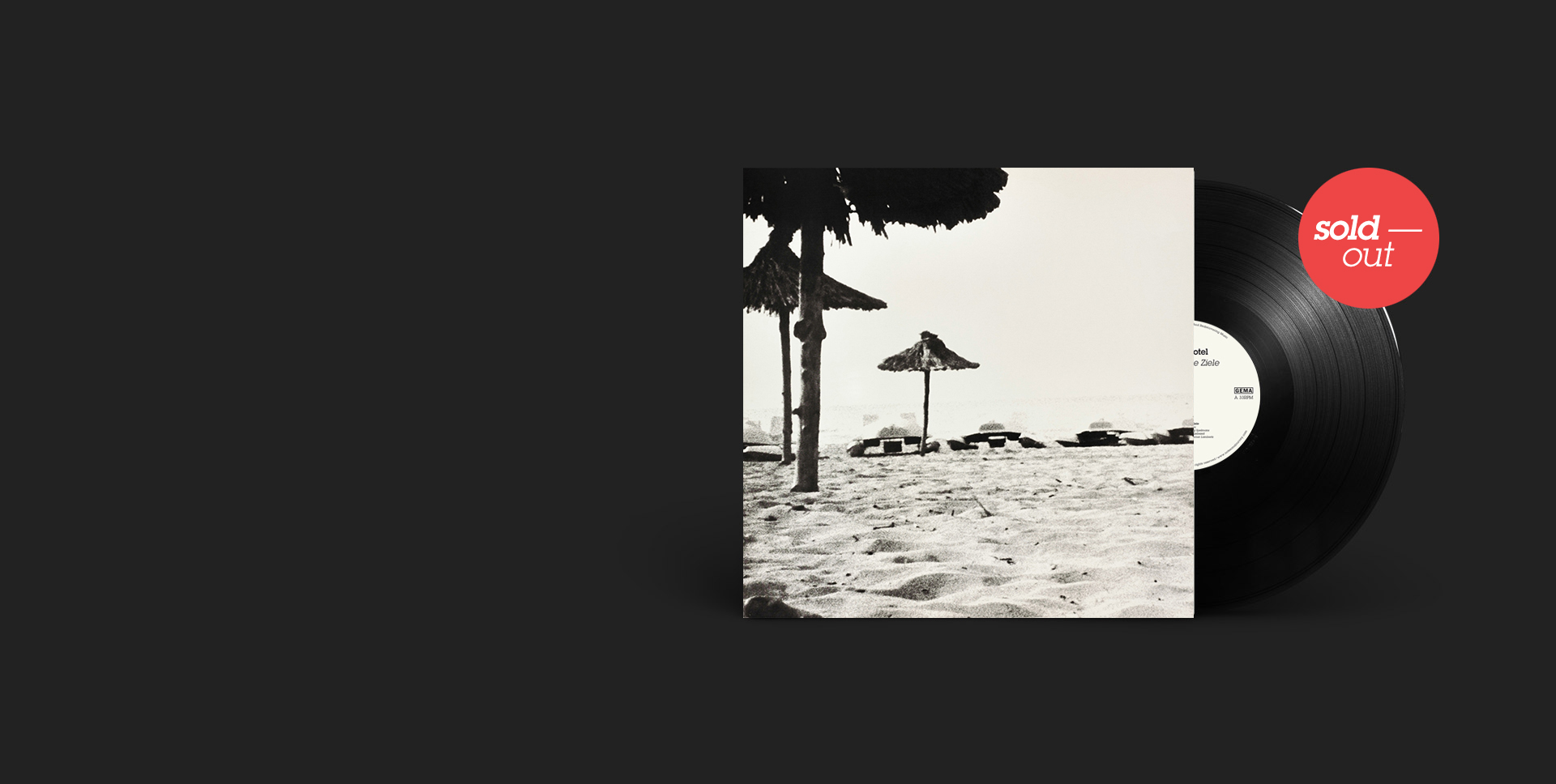 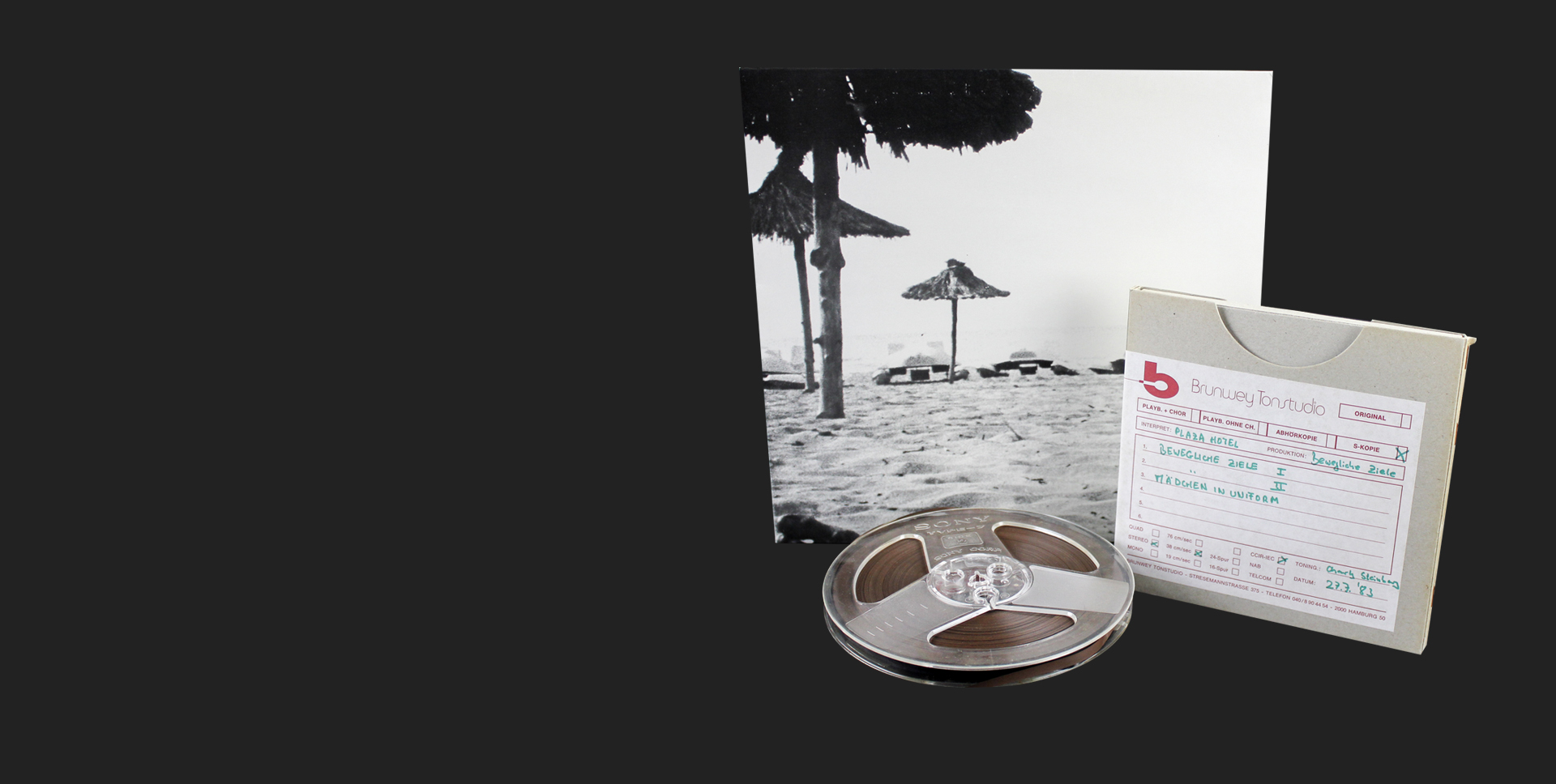 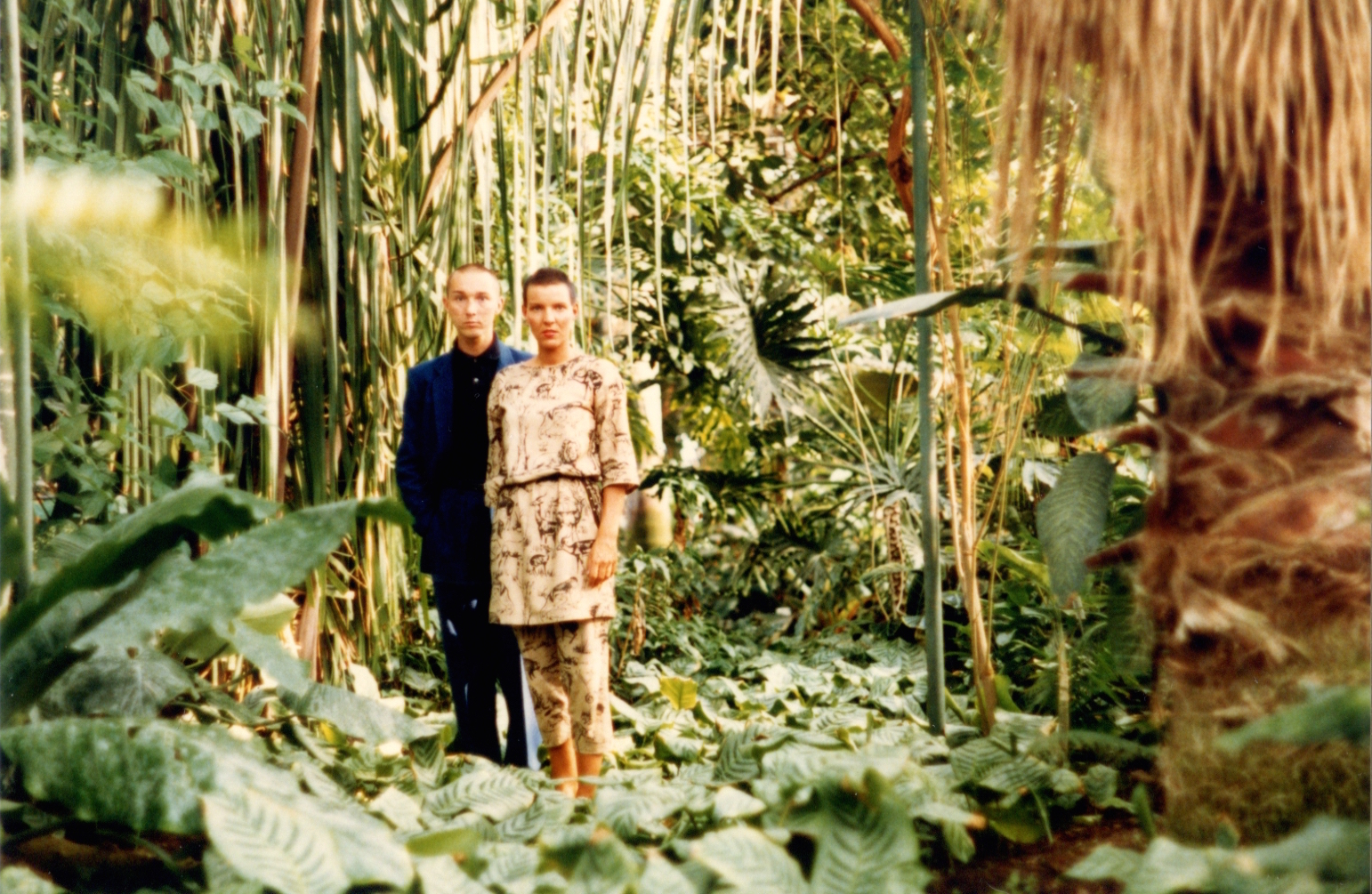 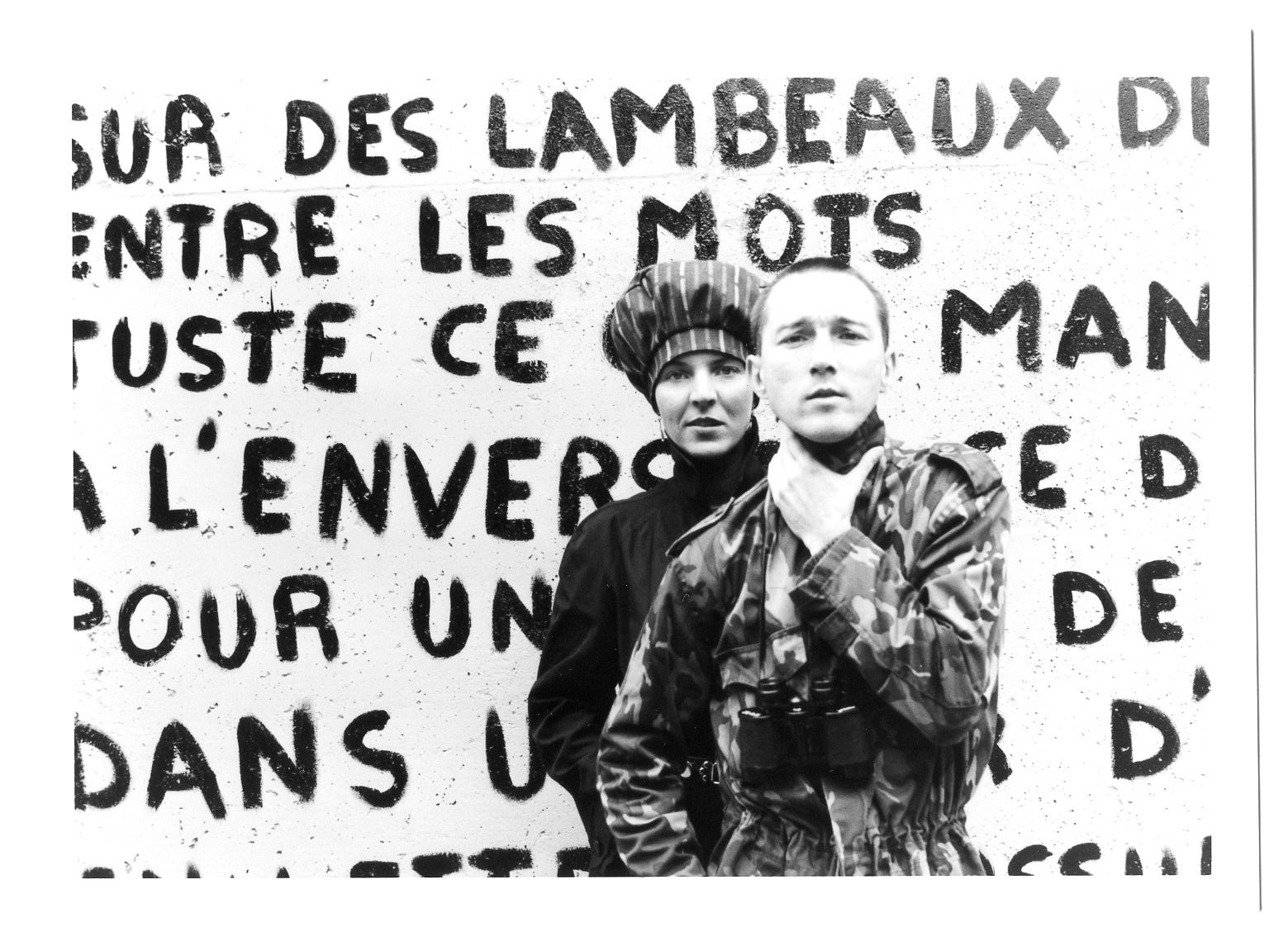 Plaza Hotel was an early 80’s studio project by DAF co-found- ing member Wolfgang Spelmanns and his wife, singer Tabu (Claudia Sennlaub).
The 12inch “Bewegliche Ziele” was pressed and privately distributed in 1983 and remains the band’s only release. Its two tracks are the result of two separate recording sessions. The rst one was an experimental recording of Can drummer Jaki Liebezeit playing over synth drum percussions. During a second session in Berlin, Wolfgang’s synths and guitars and Tabu’s vocals were added to the rhythm tracks. “Bewegliche Ziele” is an irresistible mixture of driving mesmeric afro-in u- enced rhythms, the synth wave sound of the early 80s with dreamy pop vocals verging on dub.

Browse our shop for more 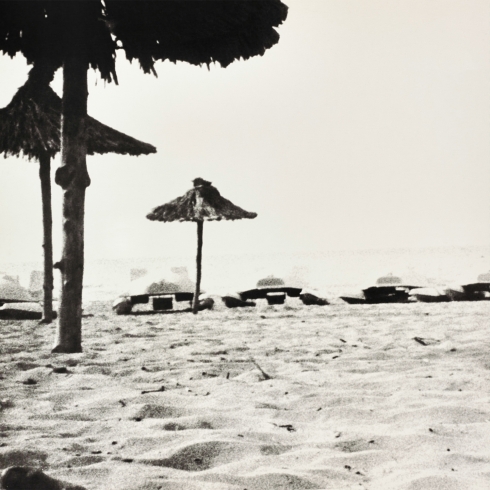 It’s 1981. Everything seems possible in the realms of music.

The barriers between genres are being willfully torn down, punk is discovering the synthesizer, the drum machine is replacing the drummer and no idea is too absurd to pursue. The winds of change are blowing from New York to London, Berlin and Tokyo and there’s a palpable, uninhibited spirit of optimism in the air turning music industry on it’s head. People are experimenting with novel equipment, bands are springing up like mushrooms, line-ups disband and regroup. A whole generation is being inspired by a do-it-yourself mentality, creating an unprecedented knowledge of how to produce music. Every artist seems to be full of ambition, conquering new frontiers whilst often participating in several projects simultaneously. When today, we look back at this time it appears as an unintelligible mess with no economic viability, but 30 years ago it was simply the sheer desire for artistic freedom, self-fulfillment and the urge to have control over one’s own creative work that was the driving force. 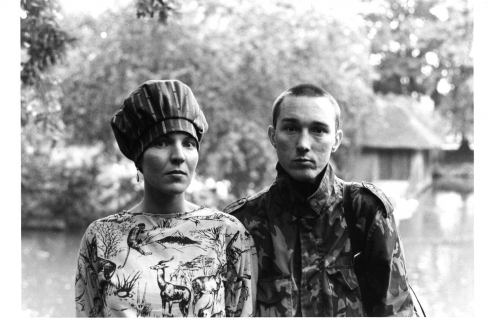 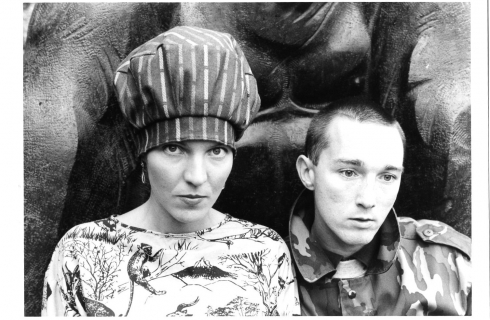 Let’s take the guitar player, Wolfgang Spelmanns. After leaving DAF (Deutsch Amerikanische Freundschaft) in December 1980, his head was full of ideas and an exuberant compulsion to express himself in as many ways as possible. A singular focus is impossible. One of these endeavors is a visit to Werner Lambertz‘s studio in Düsseldorf. While the first few takes, of what later would become “Bewegliche Ziele”, are being recorded, the main object is putting Lambertz’s self-designed modular percussion computer to the test. But the shenanigans don’t end here. Soon after, Jaki Liebezeit, the drummer of Can, is invited to jam freestyle over the programmed beats. New technologies and innovative methods have drawn the attention of Liebezeit, challenging him to play  as monotonously as if he were a machine himself (or a computer in this case). It takes him less than 90 minutes to ad-lib two stunning drum tracks for Spelmanns’ still nameless project. Spelmanns however, is not in a hurry to finish the tracks. Unlike the bustling drummer, his focus has a much broader horizon. Instead he wanders off and forms Mau Mau, a new band with his old flat mate and former partner in DAF, the bass player and member of Düsseldorf group Fehlfarben, Michael Kemner. Consequently, the recordings are left to the side and almost forgotten about.

Almost. Two years later, living in West Berlin, Spelmanns remembers the tapes and brings them, along with his girlfriend and singer Claudia Sennlaub (alias Tabu), to the Caet Studio on Kreuzberg’s Mehringdamm. Vocals and the guitar are recorded and in-studio synthesizers are enthusiastically thrown into the mix allowing the two songs to finally take on a concrete form. “Bewegliche Ziele” and “Schön Sein In Uniform” are mixed and mastered by none other than Charly Steinberg, the founder of Steinberg GmbH and developer of one of the first DAWs (Digital Audio Workstations), Cubase.

Having had mainly negative experiences with major labels (i.e. Polydor), and seeing how his friends at Ata Tak music publishing, are swamped with bureaucracy and paperwork, Spelmanns decides to independently press the record on four different-colored discs at Pallas pressing plant. Totaling only 1000 copies, the records are released on the ad-hoc label Delphin in early 1983 and are delivered straight to the door step of his apartment on Pücklerstraße. Leaving the musician, although gaining ground by leaps and bounds in the art scene, reduced to single-handedly supplying Berlin‘s record stores with his release. No wonder that only a few of the colorful discs find an audience and the potential success of Plaza Hotel is all but nipped in the bud. Amazingly, the record continues to be rediscovered time and again, throughout the years’ time. By a diverse mix of DJs and record collectors from all sorts of different countries, origins and scenes. They all take a personal interest in “Bewegliche Ziele”. From die-hard NDW fans to New Wave analysts and never-tiring sound explorers like the infamous, Dutch record collector Tako Reyenga. It is him who plays one of these rare copies, sometime in 2010, in Düsseldorf of all places, in the Salon d’Amateurs, one of the world’s hippest underground clubs, in front of a broad-minded audience. In short “Bewegliche Ziele” (played on 33rpm instead of 45rpm) becomes a signature tune not only at the Salon, but on dance floors of every boutique club operating outside of mainstream territory all around the world. About the same time Jazzanova member and co-founder of NOTES ON A JOURNEY, Stefan Leisering stumbles across the 12” in a crate in Canada. Back in Berlin he plays his discovery to his buddy and Jazzanova co-partner Alex Barck. Falling for the song’s magic as Leisering does, Barck rearranges, what was perviously considered complete, the third edition of “Computer Incarnations For World Peace” just to fit this exceptional tune into the already fine selection. 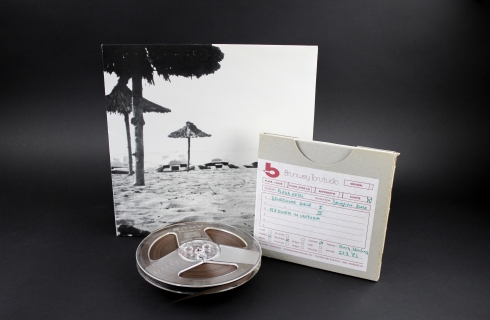 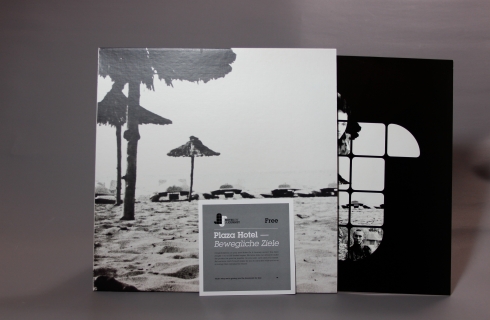  
 Spelmanns himself, now living in Bremen, working as a video artist and leading the Generic Art Ensemble, definitely didn’t expect this to ever happen. Three decades after its initial release “Bewegliche Ziele” is finally finding its listeners and revealing its long hidden spell. It’s the same with “Bewegliche Ziele” as with a lot of this time period’s music long forgotten or only released in a very limited capacity: Today, with hindsight, it gains new meaning and an extensive resonance. Over the last few years Plaza Hotel‘s skewness, the graceful peculiarity, the courageous experimentalism is being explored by new and younger groups and can be heard in current music again. Meaning “Bewegliche Ziele” could have easily be released in 2016. NOTES ON A JOURNEY thought the same and decided, that not only freaky record collectors should be able to, for extortionate prices, enjoy this timeless, fascinating piece of music on vinyl. So we have brought Plaza Hotel back to life, in all its glory.

Here you can watch a video made by Spelman’s new project “Generic Art Ensemble” with pictures from that time. Enjoy this exclusive material at Notes On A Journey.