Germannu was born into a family of plantation owners in Brazil, north of Rio. His musical journey started at the tender age of 15 and despite several detours, including studying agriculture and a death in the family pulling him back to farm work after his graduation, he always found a way to come back to his musical path. An inspiring encounter with the legendary Milton Nascimento cemented his goals and inspired him to take the risks needed to see them through. After a chance meeting with Jorge Jóia in 1984, Germannu threw caution to the wind, moved to Rio to sleep on Jorge’s couch and write and record the record you have in your hands. This fantastic slice of Brazilian Boogie also features the organ player Lafayette, drummer Paulinho Black from Banda Black Rio, and Tim Maia, among others. 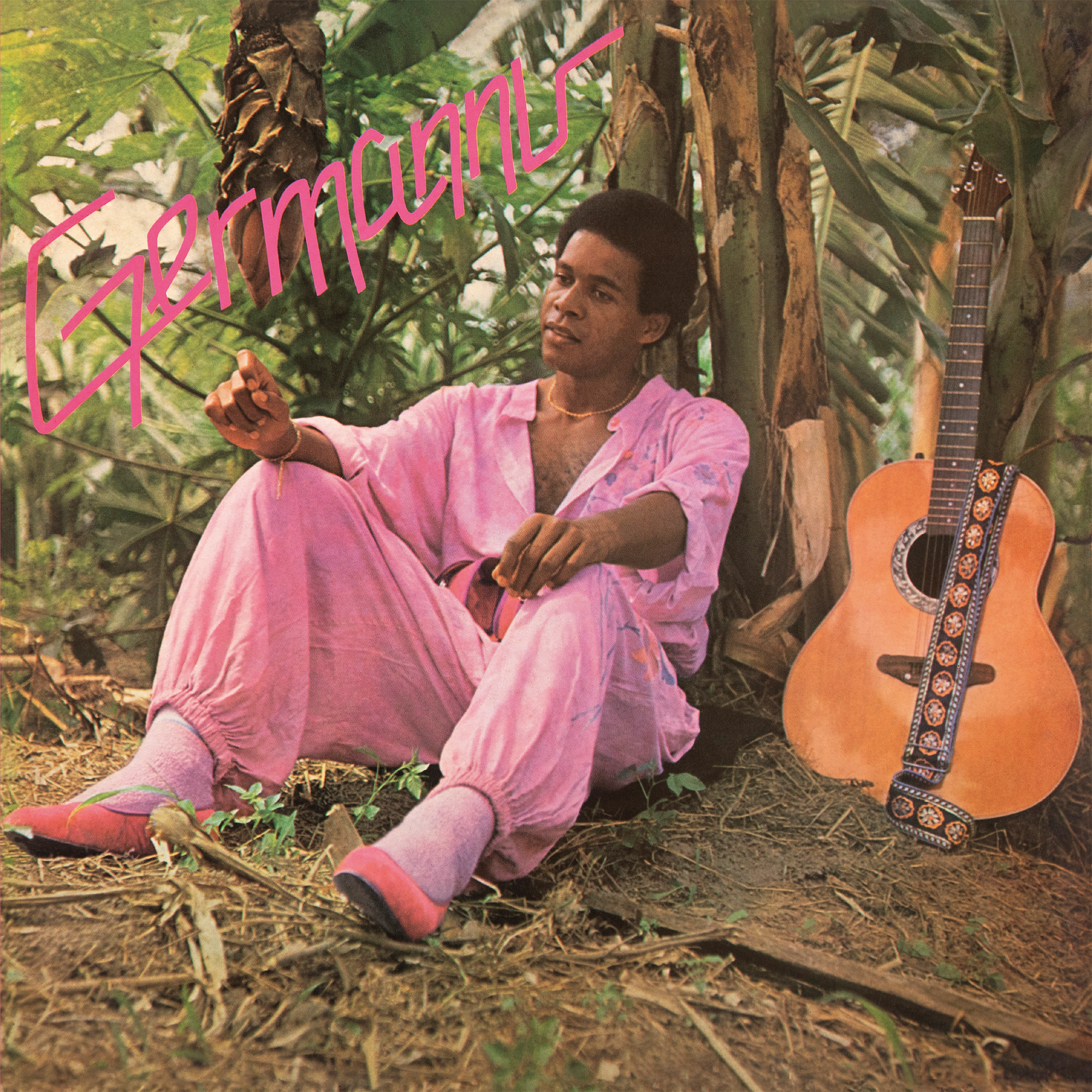 Originally released in 1984. Re-mastered from original vinyl by Oliver Haertel at Upstairs Studio Berlin. All tracks published by Edition Notes On A Journey / Fondue Publishing.

Manoel Germano Filho (better known as Germannu) was born into a family of cocoa farm owners on January 11th, 1955 in Linhares, Espirito Santo, Brazil. He was the second born of three children, but refusing to buy into the stereotype of the forgotten middle child, it took just a few guitar chords, learnt at the age of 15, to start him on his musical path. (The chords were taught to Manoel by his much-revered older sister, Germana, which she, in turn, had learned playing religious songs at Catholic school).
Manoel started his foray into education by following in his family’s footsteps, earning his agronomy degree at the Federal University of Viçosa in the state of Minas Gerais. Yet it was music rather than soil that held his heart, and after a chance meeting with Milton Nascimento, one of Brazil’s biggest musical icons — both back then and today — he threw himself into the Minas music scene, burgeoned as it was by student movements and local music festivals. 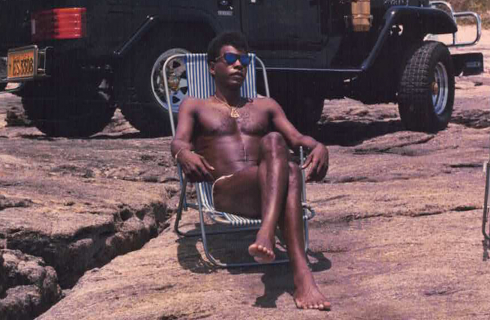 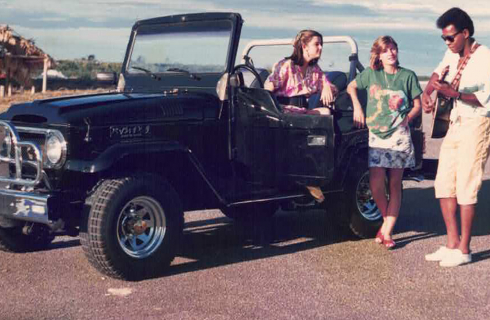 Manoel’s attempts to bring his music to the general public were abruptly derailed by the death of his father. Shortly after graduating, his dreams were put on hold and he found himself back in his hometown of Espirito Santo taking care of the family’s business affairs. It didn’t take long for though for the music to win over, and soon after he invested a considerable sum of his earnings in musical instruments and sound equipment, as well as a mobile trailer which he used as a tour bus, setting out to perform in towns in the region.
In 1984, Manoel, now Germannu, met the composer, arranger, vocalist, and guitarist Jorge “Jóia” Olímpio at a show in Linhares, and a month later threw caution to the wind, moved to Rio and found himself crashing at Jorge’s house while putting down his roots. Over the following days and weeks, the recording of Germannu’s debut LP began in earnest, starting with his songs Lavoura, Fale De Mim, and Hei De Amar.
Jorge’s help was crucial. Although Germannu had certain melodies in mind and chord structures around which he wanted to build the songs, he hadn’t yet developed how the melodies would play out, nor decided how exactly the chord sequences would go.
The pre-production was done at Jorge’s home, before they moved over to the now-defunct Estúdio Rio near the Laranjeiras viaduct to flesh things out. Jorge Jóia called on his contacts and brought in musicians he was sure would work, including a bassist and former bandmate named Borjalo, with whom he had previously played with in a band that was put together by the legendary organ player, Lafayette. Drummer, Paulinho Black (ex-Banda Black Rio), and pianist, Moisés Pedrosa, were also part of the team, as was the fabulous Jorge Cardozo — who transcribed Jorge Jóia’s arrangements.
Lavoura: Musician or not, cocoa farming was in Germannu’s blood, his family’s business was passed down through generations, and even today is in the hands of his youngest sister, Vera Lúcia. The song Lavoura is a tribute to an unforgettable figure in Germannu’s life — a farmhand and driver named Zé Côco. He was a great friend and companion to young Germannu, and male influence outside his home, the majority of which were women. Zé and Germannu spent a lot of time together during the annual harvest season and Zé taught Germannu to drive, while also regaling him with story after story of many thing best left to the imagination.
Falem De Mim: Brazil is a classist society and the financial comfort which the family’s cocoa farms afforded Germannu (foreign cars, expensive clothes, and land), also generated jealousy and gossip in his hometown. His response was Falem De Mim (Say good things, say bad things, as long as you’re talking about me — a personal kind of all publicity is good publicity). It’s important to note that Germannu’s self-awareness leads to this song being an ironic and humorous reply to the comments and rumours he was hearing about himself.
Hei De Amar: In early 1983, Germannu met the popular singer Luiz Caldas as well as the illustrious Bahian duo Dodô and Osmar, creators of the fabulous Trio Elétrico tradition of the 50s. As a response, Germannu released an independent 12” produced in Bahia. It included the songs Ladeira Da Barra, Baiana De Acarajé, and a cover of Oxumalá by Luiz Caldas, who was featured on guitar.
Sadly, Germannu is no longer with us, but the lasting groove of his music remains eternal and continues to bring a special kind of joy to those that hear it.
So, where does Notes On A Journey fit into all of this? Jürgen von Knoblauch — a longtime member of Jazzanova and Sonar Kollektiv, amongst others, is introduced on our site simply as Record Collector — met Junior Santos, a musician, drummer, and Brazilian music aficionado extraordinaire, when buying records from him. Junior convinced Jürgen to buy a record by one Celso Rubinstein — which led to a NOAJ reissue (which if you haven’t discovered already, you should). The collaboration between knowledge fount and collector was fruitful enough that Junior and Jürgen decided to work on more reissues. This Germannu record is their first complete collaboration, with more on the way.
When releasing older and more obscure music, collaboration is extremely important at NOAJ, especially when it comes to getting the rights and making sure that we rightfully acknowledge all of the musicians involved on a record we are re-releasing. Junior Santos, a true expert in the Brazilian music genre, who put together compilations like Brazilian Disco Boogie Sounds (1978-1982) on Favorite Recordings, helped us track down the rights holders of the featured compositions. He also wrote the liner notes and descriptive texts for each song in Portuguese.
Invaluable translation work was done by Greg Caz, who is well known for his compilation projects on Cultures Of Soul and Mr. Bongo. Furthermore, he DJs weekly at Nublu in Manhattan and monthly at Our Wicked Lady in Brooklyn — so now you know where to go on a night out when you’re next in New York.
Notes On A Journey · PREVIEW: NOAJ007 – Germannu – Germannu